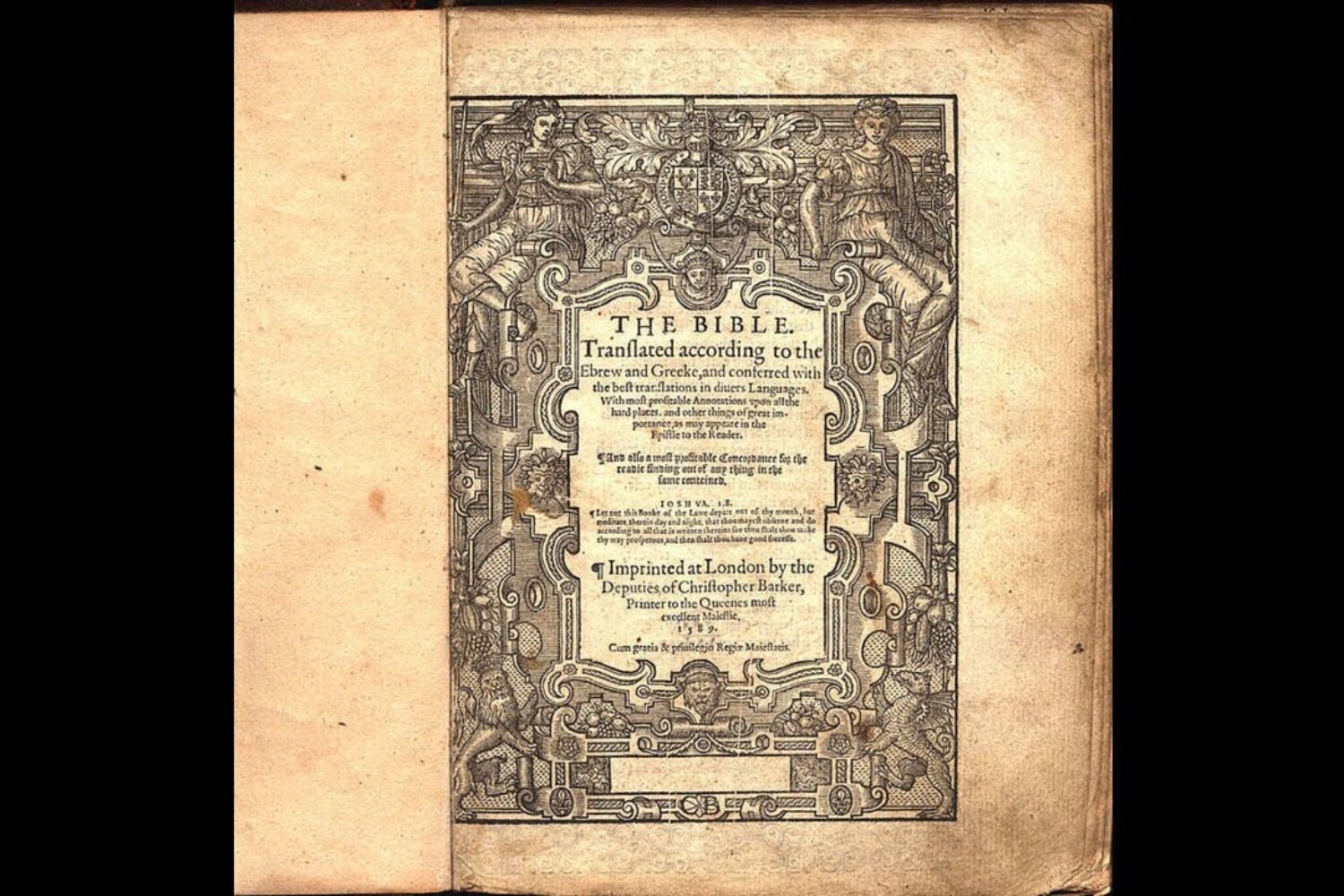 Why does Grammar of Grace use the Geneva Bible for its Bible translation?  It’s really obscure!  Well… actually, the Geneva Bible used not to be obscure.  It’s true that most of today’s Christians haven’t heard of it, but it turned the world upside down in its day.  Even secular historians count it as one of the most important documents in English history, because everybody was reading it.

The choice of Bible translation for Grammar of Grace received a lot of consideration.  But in the end, the answer was never really was in doubt; again and again, the Geneva Bible was the clear winner.

Why?  Well, there were two main reasons—accuracy and language.  Today I’ll share a bit about the Geneva Bible’s accuracy, and tomorrow we’ll discuss language.

The most important thing to consider when selecting one’s Bible translation is, of course, how accurately it expresses the original texts of the scriptures.  The Old Testament was written in Hebrew, and the New Testament in Greek; and God has providentially preserved those texts for us, throughout the ages.  We call this the doctrine of the Preservation of the Text.

It is God’s will that we then translate the scriptures into our common tongues—in our case, English!  But the translations are not supernaturally inspired, neither are they supernaturally preserved.  So, especially in a day in which, according to the American Bible Society, there are 900 versions of the Bible in English (complete or incomplete), it is necessary that we evaluate our translations for accuracy.

And here is where I have to give you bad news… I’ve tried to find a way around saying this, but there’s nothing for it; if you love the Lord, you need to know this.  Not everyone who makes a Bible translation loves the Lord.  Some men do not love the Lord, and engage in the work of Bible translation not to lead men to the Lord, but to the contrary, with an eye toward changing God’s Word for their own purposes.

During the Protestant Reformation, Christians were being killed all over Europe, wherever the Gospel of salvation by grace alone through faith alone had spread.  Christians were burned alive; entire villages were slaughtered; men, women, and children were tortured and killed for faith in Christ.

In God’s providence, those faithful ones who escaped persecution in their home countries found safe haven in Geneva, Switzerland, under the protection of John Calvin.  There were gathered Christians from Scotland, England, the Netherlands, France, Germany, Hungary, Italy, and Spain.  They formed little congregations there, each worshiping in their own tongues and studying the scriptures under Calvin’s insightful teaching.  John Knox, one of the leaders of the English-speaking congregation there described that period as “the most perfect school of Christ since the days of the apostles.”  Calvin encouraged these refugees to prepare to return to their homelands as missionaries.  They undertook the task of translating the scriptures into their own tongues—a crime worthy of torture and death in their home countries; and indeed many of them, returning home with translated Bibles, would suffer those penalties.  These men and women were willing to give all for the glorious Gospel of Christ.

Prior to this time, John Wycliffe, William Tyndale, and a few men after them had labored to produce an English translation of the Bible.  At last, at Geneva, everything was in place for the accurate completion of that blessed work; it would be called the Geneva Bible.  This Bible, and the translations into the other languages represented in Geneva, were the first to label the scriptures with chapter and verse numbers, to aid in Bible study.  They had notes in the margins, explaining difficult bits of translation or hard passages.  The title page reads, “The Bible and Holy Scriptures Conteyned in the Olde and New Testament.  Translated According to the Ebrue and Greke, and conferred With the best translations in divers languages.  With Moste Profitable Annotations upon all the hard places, and other things of great importance as may appeare in the Epistle to the reader.”  I love that—“Moste Profitable Annotations upon all the hard places!”

The Geneva Bible was, obviously, banned.  But the more the king or queen tried to banish the English scriptures, the more they spread.  For example, in God’s providence, there was a famine in Britain, so hidden in barrels of grain, Geneva Bibles made their way across the English Channel.  It cost a year’s wages to purchase a Geneva Bible.  Can you imagine saving up $80,000 to buy anything that isn’t a house—indeed, just to buy a single Bible?  But the men of that time were overjoyed that—at a cost that was within their reach—they could purchase their very own copy of God’s Word.  Oh, for shame that in our day we count the Bible such a cheap thing that it lies unopened upon many a bookshelf!

When James became king, he was every bit as much of a Christian-In-Name-Only as his mother, Mary Queen of Scots, had been.  To be clear, when the Pilgrims fled to America, they were fleeing King James!  He hated Geneva Bibles, especially the margin notes, which taught (among other things) that if one’s ruler was in utter rebellion to God, it was one’s duty to obey God rather than man.  Remember, this was the time when some kings and queens were openly declaring that every “heretic” (that is to say, Christian) must be exterminated; these were not mere intellectual discussions but very real issues that men who were, say, mayors or soldiers, had to consider.

Eventually King James realized there was no winning the battle to rid his country of the Bibles.  So he settled upon a solution:  He would sponsor an Authorized Version of the Bible, which would be freely permitted in churches and homes in England, Scotland, Ireland, and Wales.  Thus Geneva Bibles would be replaced by his Authorized version of the Bible.

The committee chosen to create the new translation almost entirely plagiarized the Geneva Bible, but they got rid of the hateful margin notes and made a few changes to bring the English Bible more into agreement with the Roman Catholic Bible.  For example, in 1 Corinthians 13, the Greek scriptures teach that, love is patient; love is kind; etc.  But the Romish church translated that passage as charity is patient; charity is kind—and this was an important scripture that they used to support their doctrine of the necessity of good works for salvation.  On the whole, though, the KJV committee largely left the text alone, so if you’re familiar the KJV, the Geneva Bible will also seem very familiar.

So why does the Geneva Bible pass the accuracy test?  The men who translated the Geneva were willing to—and several actually did—give their lives for the sake of delivering the Word of God accurately to English speakers.  They were devoted to doing this well.  And they did.

I’ve used it for years, and I have found it to agree with the original Greek and Hebrew scriptures better than any translation I’ve ever used before (and I’ve long been discerning about my translation choices!).  I believe it is the best English translation we have.

That’s not to say it’s perfect; no translation ever can perfectly convey the full sense of one language into another.  But it’s quite good.

That’s also not to say that all other translations are bad.  I spent many a profitable year growing in Christ using my NASB, for example.

But what’s up with the Middle English?  No matter how accurate it is, isn’t it better to learn the scriptures in the everyday language that we speak?  Stay tuned for Part 2!

By the way, what do you think the Pilgrims took with them on the Mayflower?  You’d better believe it!  The Bible present at the spiritual foundation of our country was the Geneva Bible.

Have you spent any time using the Geneva Bible?  How have you liked it?