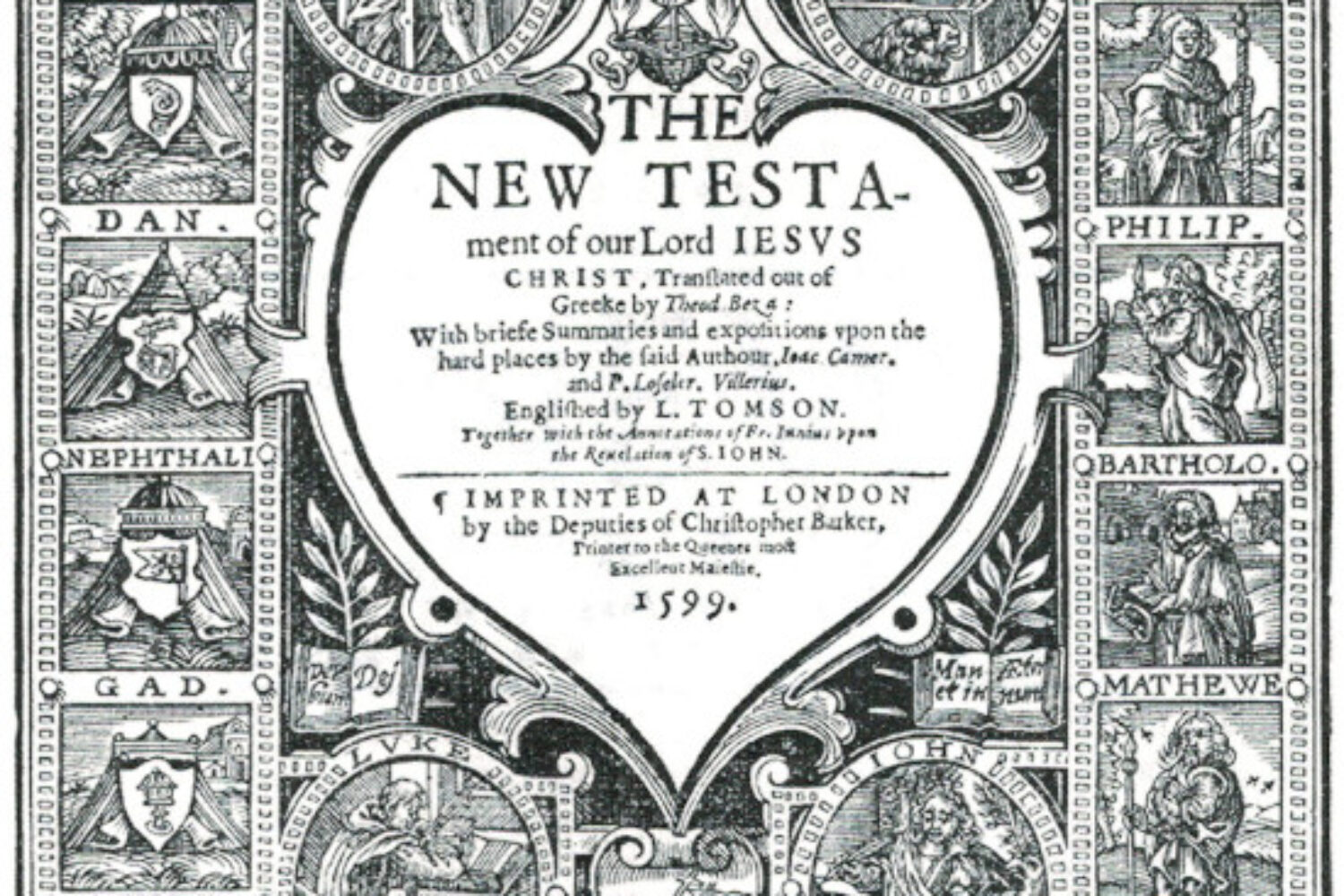 Many people ask why Grammar of Grace uses the Geneva Bible for its English Bible translation, which is a bit, err… different for modern readers.  Wouldn’t it be better for our children to learn the Bible in the everyday language they’re familiar with?

My husband and I gave great consideration to the question of Bible translation, and—as I explained in the previous article—the main reason why we chose the Geneva Bible is because we think it is the most accurate English translation.

Having made that decision, though, there are many more benefits our homeschool grammar school students enjoy because of using the Geneva Bible, especially when it comes to language.

Let’s start with the most obvious one—the working vocabulary of the average English speaker at the time the Geneva Bible and Shakespeare’s plays were written was about 18,000 words.  We know this because Tyndale, Knox, and the other Bible translators of that time were translating into the language that average people understood.  And average people did, indeed, buy and read these Bibles.  Similarly, Shakespeare’s plays were attended by audiences not just of the nobility, but from the lower classes as well.  The working vocabulary of the average English speaker today is about 3,000 words.  If our children read the Geneva Bible, they will learn a much richer vocabulary.  (And artful use of the language as a whole.)

And while I’m at it, the English of the Geneva Bible is not Old English!  And it’s not even Middle English.  It’s Modern English.  For real.  Here’s the way you can tell—Old English is also known as Anglo-Saxon, and you couldn’t even begin to read it; it’s like German or something.  When you see Middle English, you see a bunch of words that are spelled wrong but that kind of look like words you might know, some words you totally can’t figure out, and when you put the whole thing together, you have the sneaking suspicion you have no idea what it all actually meant.  The English of the Geneva Bible—and the KJV and Shakespeare—may have slightly funny spellings, but it’s definitely the language we know and love; it just constantly reminds us that we didn’t learn vocabulary in school very well.

So the Geneva Bible’s language is more beautifully written than what we would see written today, and with a richer vocabulary, but it’s totally the same language we speak!

And speaking of more beautiful language and richer vocabulary—the fuller vocabulary carries more meaning.  I’ll give you a few examples.

The Geneva Bible uses thee and thou, but it also uses ye and you.  Because they mean different things.  Seriously!  Thee and thou are the familiar form of address; they’re how family members talk with each other; they’re also singular.  Ye and you are how people who are not close speak to each other; they’re more formal and indicate respect; they are also the plural form.  So the Ten Commandments are less like a formal legal code given by a king, and more like the commands a father gives his children.  Modern English translations lose those sorts of distinctions entirely.

Funny words like wherefore mean something.  It could be very accurately translated as, “because of this thing, this is what follows.”  We usually substitute why in the place of wherefore, because we simply have no concise way in modern English of conveying that meaning, but why doesn’t exactly mean the same thing.  It doesn’t indicate the thing that has just previously been said and directly connect it to a conclusion or consequence that is to follow.  Words like wherefore, that we’ve dropped from our common usage, were very useful for saying a lot in just a single word.  In other words, dropping 5/6ths of our working vocabulary has made our communications with one another less clear—more vague.

Froward is another example.  Proverbs 2:15 speaks of men who are froward in their paths.  The word is like toward; you might go “to and fro”; froward is like saying “away-ward”.  These men are choosing their direction in life, specifically to go away from the Lord and his laws.  We have no effective way of saying this in today’s common speech.  So—as far as learning language goes—the Geneva Bible gives a far better education than one of the 900-or-so translations that have come out in the past 50 years.

Some argue that the whole point of translating the Bible into one’s own language is so that it won’t be in a different language from the everyday language of a people.  And there’s a lot of validity to that argument.  In this case, I point out two important things, which caused me to weigh that argument a little less heavily.

First, one of the things Bible translators often have to do in bringing the Bible to a new language is to invent words that do not exist in that language.  Pagans often do not even have words for ideas like redemption or grace.  And many of the words that have been dropped from common usage in English over the past 200 years are words that explain the Christian faith.  Atonement, justification, repentance, propitiation—these sorts of words teach different things about the glorious Gospel of Christ, and we are the poorer for not having them in our daily speech.

Second, I learned all of my memory verses in KJV English as a child.  And not only did it not hurt my understanding of the Bible—I believe it made me understand the scriptures better.  Not right away, mind you!  There were definitely plenty of words I didn’t understand as a child.  But it was just like learning all of English in childhood—of course I didn’t understand every word when I was young.  As I grew up, and into adulthood, those words were all part of my understanding of the English language.  I came to understand all of these scriptures, just like I came to understand words like photosynthesis.  And it definitely made me smarter and better at the study of English, literature, and even foreign languages.

When we were first considering switching to the Geneva Bible from our beloved NASB, my husband was suspicious about the thees, thous, and thithers.  He’s not from America, and didn’t even have the cultural familiarity with King James English that we have.  I suggested that I thought he would get used to it.  And he quickly did!  We still enjoy the novelty of the translation, and get a good laugh over things like Abraham’s and Sarah’s being “stricken with age”, but we look up words we don’t know, and for the most part read without any difficulty.

And, by the same token, we have no difficulty reading The Pilgrim’s Progress, Foxe’s Book of Martyrs, or the many, many other important writings of the Reformation era.  Well… we do have trouble; we did go to public school.  But they are within our reach.

The Geneva Bible is a really, wonderfully accurate translation.  But it’s also fabulous for training children’s minds, our secondary goal in Grammar of Grace.  And it can’t be beat for teaching language arts, perhaps the most important of our third-tier, subject-specific goals.

Did you memorize lots of scriptures using an old translation like the KJV, as a child?  How did learning that language in childhood affect you?