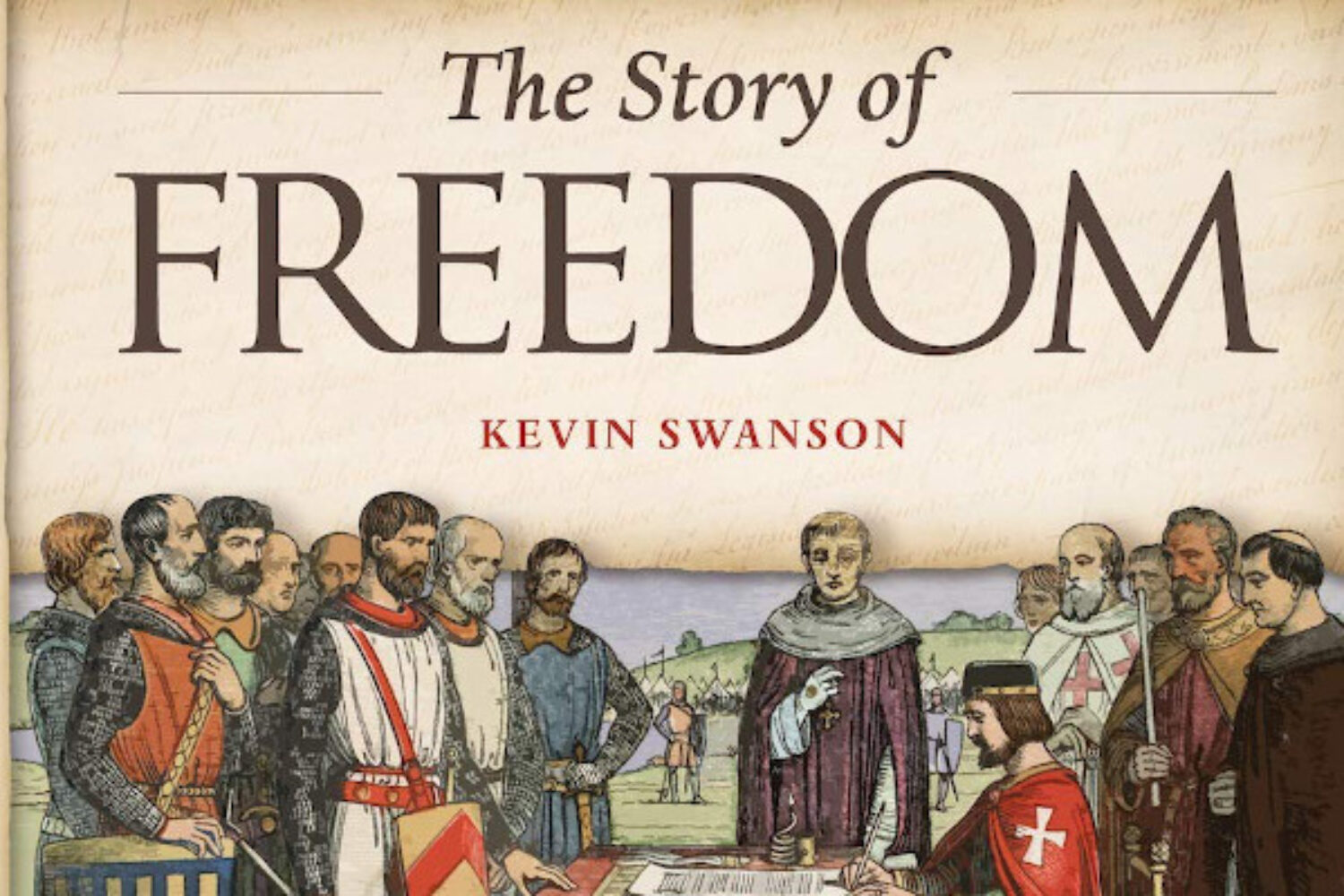 Are we living in historic times?

Many of us are asking that question today.  The underlying thought is:  If we are living in historic times, how should we act?  What should we do??

And of the children of Issachar … were men that had understanding of the times, to know what Israel ought to do…  1 Chronicles 12:32

We want to be like the children of Issachar, right?  We want to understand the times we’re living in, so we will know what we ought to do.  That’s why so many people are asking—in days of baby killing, gross immorality, riots, and rapidly spreading Christian persecution—What should we do?  What can we do?

The Story of Freedom, by Kevin Swanson, is a history book like none you have ever read before.

Most history books focus on men who conquered and enslaved many other people, building empires for themselves.  Alexander the Great, Julius Caesar, William the Conqueror, and Napoleon Bonaparte are the men called “great” in most history books.  But is that how God views history?  What about the ordinary people living in those nations; did they think their rulers were great… or did they groan under their enslavement?

The Bible teaches that rulers ought to govern in such a way that ordinary citizens are free to provide for their households, raise their children, and worship the one true God in peace.

Exhort therefore, that first of all supplications, prayers, intercessions, and giving of thanks be made for all men, For Kings, and for all that are in authority, that we may lead a quiet and a peaceable life, in all godliness, and honesty.  1 Timothy 2:1-2

When evildoers commit crimes that infringe on the life and liberty of other people, rulers should punish them.  According to God, who created the role of rulers on earth, that’s their job.  Not to build impressive monuments, and not to conquer other tribes and nations to unify them under a strong central government.  The Bible says that the civil government is supposed to punish evildoers when they commit crimes that infringe on other citizens’ rights to live peaceably.  For example, the civil government ought to punish murderers and thieves, and those who perjure themselves in court.

Fun fact:  Did you know that the Bible makes no mention of civil government in the Antediluvian World, the world before the Flood?  The Flood, of course, was God’s judgment on all of the people on earth—and we estimate that there were many millions of people who perished in the Flood—because they had filled the earth with violence.  (See Genesis 6.)  After the Flood, when all of those people and the whole earth had been destroyed, and Noah and his family were to make a new beginning, God instituted civil government with this command:

Who so sheddeth man’s blood, by man shall his blood be shed: for in the image of God hath he made man.  Genesis 9:6

So when we take men who started wars, killing hundreds, thousands, and even millions of people for the sake of enriching themselves, and call them “great rulers”, we’re really turning history on its head!  According to God’s purpose for rulers, the great rulers would be men who gave up their own power so the people could live in peace.  Truly great rulers are even willing to suffer harm, following the example of Jesus Christ, so their people will be delivered from enslavement.  And, yes, there have been rulers like that; those are the men we ought to be studying in history!

The Story of Freedom

In The Story of Freedom, Swanson tells the stories of moments in history when innocent people were threatened with terrible danger and oppression, and how God used faithful men to stand against the evil of their days and bring deliverance to the people.  Often, it is only one man who makes the difference between enslavement and freedom for an entire nation!

Swanson tells the stories of the early Church’s work to end slavery wherever they lived, the Magna Carta, William Tell in Switzerland, William Wallace in Scotland, the protestant Dutch suffering under the Spanish Inquisition, the Pilgrims, Oliver Cromwell, and Patrick Henry.  The stories are exciting; the details of what happened are amazing; the faithfulness of the men of God who acted with courage and conviction is inspiring.

The bookends of the book are a bit of a treatise on Freedom…  Swanson begins by defining Liberty, and giving a historical perspective on Tyranny.  He then moves on to a look at examples of liberty and tyranny in the biblical accounts, which leads into all of the stories of liberty and tyranny in Christian history; this forms the main body of the text.  The book concludes by looking at the times in which we live today, in light of this history, and what we ought to do.

God calls some of his people to suffer persecution, it is true.  But as many of us have experienced firsthand, he also often blesses the people who follow him and order their lives according to his Word with peace, prosperity, and freedom!  We cannot presume to expect peace for ourselves and our children during our time on this earth, but we can and should pursue it.

You have surely heard the old quote, “Those who are ignorant of history are doomed to repeat it.”  I love learning about history, because, yes, I am warned about dangers past generations have faced and learn to recognize and avoid them…  But even more, I love learning about how God helped his faithful ones to endure terrible evils, and even to overcome them!  It is encouraging to consider the faithfulness of Christians who’ve gone before us; it is inspiring to hear the tales of those who overcame incredible dangers and foes!

I couldn’t recommend The Story of Freedom, by Kevin Swanson, more highly.  It’s a fun read, and it will change your outlook on both history and the times we ourselves are living in.