The Man Who Knows All The Words 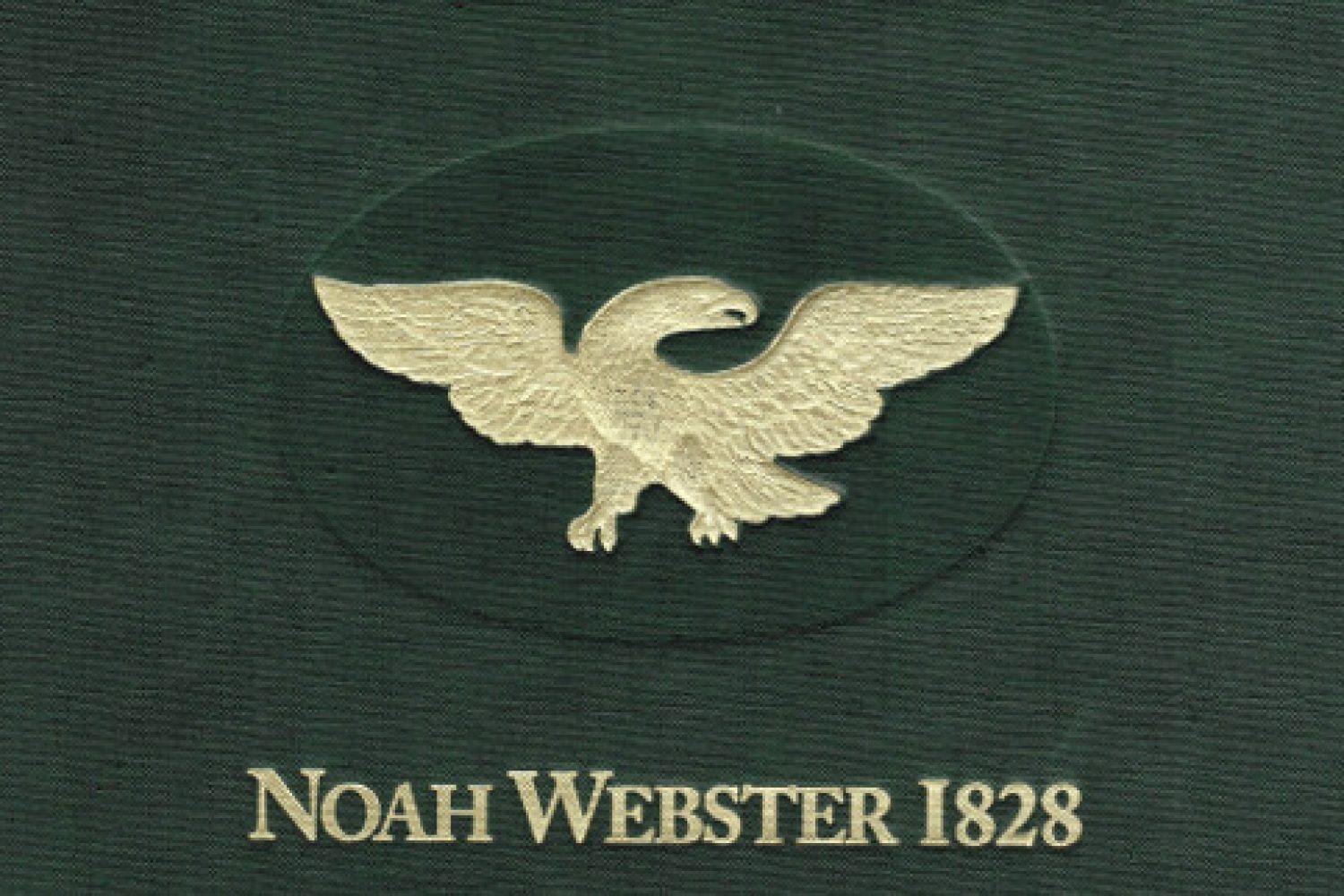 Two moms sit with their small class of later knowledge students, and as the the Blue Back Spellers are opened up, they giggle and say, “The Man Who Knows All The Words.”

What a fitting epithet; they should have been there to make sure someone added that to his tombstone: Noah Webster, The Man Who Knows All The Words.

Good grief, I just looked up epithet, to make sure I was using it correctly, and Webster says, “It is sometimes used for title, name, phrase or expression; but improperly.”  We need a little more Noah Webster around here!!

There is no doubt that Noah Webster loved our Lord and Savior Jesus Christ.  In 1808, he was converted from humanism, or rationalism, to genuine faith in Christ.  After being persuaded to attend church with his family and hearing the sermon, his mind was disturbed by doubts about this humanistic, rationalistic approach to religion that he had picked up in his schooling.  He wrote about himself,

I continued some weeks in this situation, utterly unable to quiet my own mind, and without resorting to the only source of peace and consolation [he resisted turning to Christ].  The impressions however grew stronger till at length I could not pursue my studies without frequent interruptions.  My mind was suddenly arrested…  I closed my books, yielded to the influence, which could not be resisted or mistaken and was led by a spontaneous impulse to repentance, prayer, and entire submission and surrender of myself to my maker and redeemer.

Webster’s love for Christ, born at the age of fifty, shines through all of his work; and the insight gained from his diligent study of the scriptures played no small part in it.  His life’s work was transformed from a fairly successful endeavor to a body of work that shaped the very character of a nation, the nation that would send missionaries and shine the light of freedom to every corner of the globe.

Containing, the Rudiments of the English Language, for the Use of Schools in the United States

As a young schoolteacher during and after the American War for Independence, Webster noticed the need for a distinctively American curriculum for American students.  American children should not be taught the language and culture of England, but of their own country, he thought.

Webster produced his first primer before he yielded to the Lord in repentance and faith.  In it, he diminished the mentions of God and the use of scriptures honoring him, compared to the primers that most children were using at that time.

However, after his conversion in 1808, he developed a deep conviction that the scriptures were absolutely necessary to education, and, further, that the Bible was the most important book to be studied.

Over the course of his life, The American Spelling Book, or Blue Back Speller, as it came to be known because of its beautiful blue cover, would pass through many editions.  The one to get is the 1824 edition.  It is a masterpiece.

Using this little book, you will learn more about how the English language works, and learn more words, than you ever dreamed possible.  And the lessons teach the fear of God, kindness toward others, making good friends and shunning bad ones, right and wrong, how to be a good student; about animals, plants, and seasons; weights and measures, science, poetry, proverbs, the Creation, diligence, what to look for in a potential husband or wife, an entire catechism of Christian virtues and wisdom, and (yes!) even more.

His first lesson begins, “No man may put off the Law of God,” and the last concludes that gloomy Christians are hypocrites.  They’re all absolute treasures, but here’s just one to give you a taste:

As for those boys and girls that mind not their books, and love not the church and school, but play with such as tell tales, tell lies, curse, swear, and steal, they will come to some bad end, and must be whipt till they mend their ways.

An American Dictionary of the English Language

Webster’s Dictionary is a monument for many reasons.  It defined American English as a distinct language, particular to our nation, rather than as a degraded form of the language spoken by those who would enslave us.

Webster, as a man devoted to God and filled with his Holy Spirit of wisdom, took all of the good about American culture—rooted in the Calvinistic theology of the Reformation, and the faith and courage of the Pilgrims, and the writings and work ethic of the Puritans, and the devotion of the Great Awakening—and defined American English, the language itself, in the context of our American culture, which is to say, in the language of genuine biblical Christianity.

The best way to explain it is to let Webster’s definitions speak for themselves.  I’ll just list a few, for examples.

EDUCATION, noun.  The bringing up, as of a child, instruction; formation of manners.  Education comprehends all that series of instruction and discipline which is intended to enlighten the understanding, correct the temper, and form the manners and habits of youth, and fit them for usefulness in their future stations.  To give children a good education in manners, arts and science, is important; to give them a religious education is indispensable; and an immense responsibility rests on parents and guardians who neglect these duties.

NATURAL, adjective.  Pertaining to nature; produced or effected by nature, or by the laws of growth, formation or motion impressed on bodies or beings by divine power.  Thus we speak of the natural growth of animals or plants; the natural motion of a gravitating body; natural strength or disposition; the natural heat of the body; natural color; natural beauty.  In this sense, natural is opposed to artificial or acquired.

PARTIAL, adjective.  Biased to one party; inclined to favor one party in a cause, or one side of a question, more than the other; not indifferent.  It is important to justice that a judge should not be partial.  Self-love will make men partial to themselves and friends.

Do you see how the definitions do not stop at merely the words themselves, but also teach lessons?  And consider what an impact is made on the education of the populace, with the choice of which quotation is used for the example of how a word may be used in a sentence.  After several years of use, my best guess is that fully half of the quotations Webster uses in his definitions are scriptures.  The definition for judge alone has eleven Bible verses as references!

The student learning that the meaning of natural is having to do with the laws impressed on things by the Divine Power, is learning a very different thing about everything around him, including himself, than what the child learning from merriam-webster.com will learn: “occurring in conformity with the ordinary course of nature : not marvelous or supernatural”.  That would be the opposite of the true meaning of natural!

Get a Webster’s 1828 Dictionary and make your children use it in homeschool.  Use it yourself when you read the Bible or other challenging books to your children.

Use Webster’s 1824 Blue Back Speller to teach your children to read, spell, read aloud, fear God, have good character, convert inches to miles, and pick a mate.  Well, it needn’t be your primary textbook for all of those things.  But you’ll be amazed at how well it stands up after 200 years.

In the Grammar School at Home: Later Knowledge Guides, in three years, the children read every blessed word in that little Speller.  It’s quite a feat.  And it bears much fruit.

Do you use any of Webster’s works in your homeschool?  Please share what you’re doing in the comments!