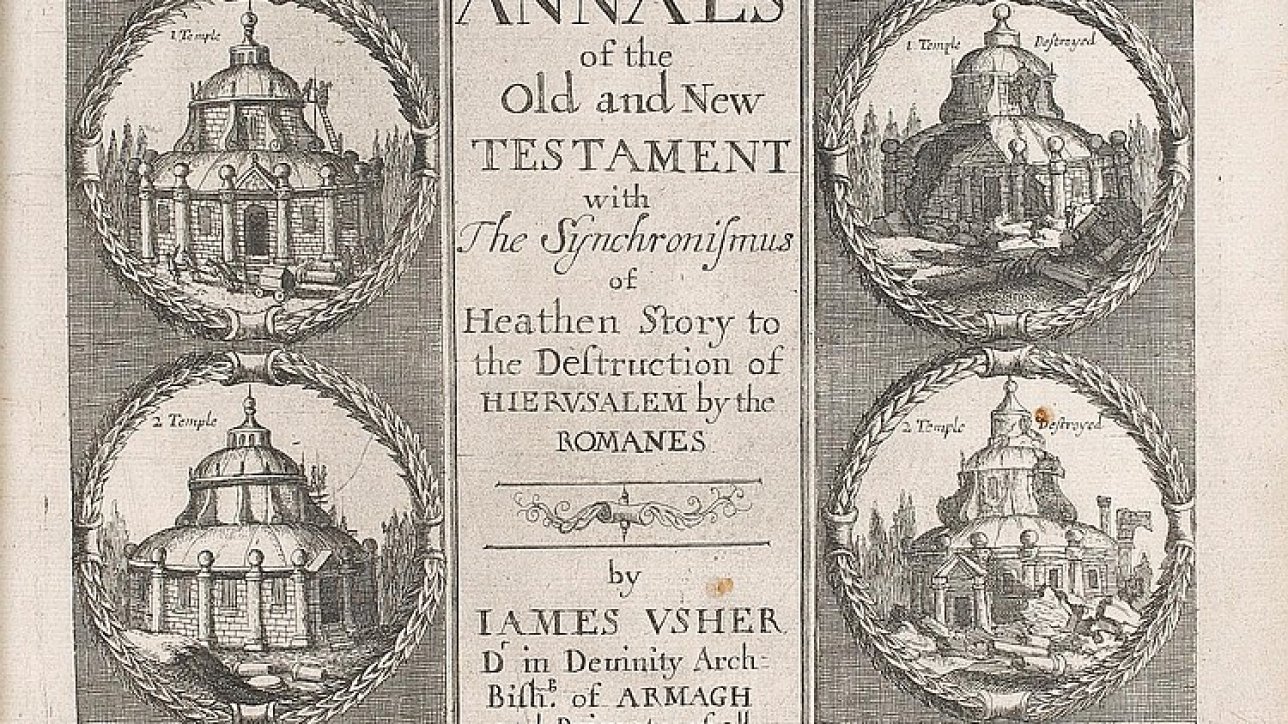 So when I finally got my copy of Ussher’s Annals of the World, and turned to the first page about history, I was met with an incomprehensible set of numbers and letters.

Flip a few more pages, the same strange code.  I soon recognized, at the end of the code, numbers followed by “BC”, and—sure enough—the numbers looked like a date.  Yes, that’s the date BC.  But what were these other numbers?

Thus, years ago, went my introduction to AM dates.  In Ussher’s Annals, all of the dates before Christ are first listed as dates Anno Mundi, or Year of the World.  AM dates begin, sensibly enough, at the Beginning, which is 1 AM.  And they go forward, just like real years.

So that makes a lot of sense.  I mean, that totally makes sense.

Then…  Why don’t we count ancient dates that way?

First, the dates in the Bible are not counted in Anno Mundi dates.  It’s, “When Noah was 600, the Flood came,”—that sort of thing.  You have to sit down with pencil and paper and write all of the dates up and add them together to turn them into a single system.  And, apparently, not many people bothered to do that before the Protestant Reformation.

Second, it seems that the first folks to think up keeping their dates running instead of starting over with every new ruler were the Romans, and they made their start date the supposed founding of the city.  That was a good improvement.  Not the Beginning of the World, but not bad for pagans.

Then, during the Christian era, Christians began dating everything from the birth of our Lord Jesus Christ.  And just as it makes sense to say, “We were married 2 years before you were born,” it made sense to say, “Augustus was made Caesar 27 years before Christ was born.”

No one really bothered to add up and organize all of the dates from the Creation of the World until Christ’s birth until Archbishop James Ussher.  Close enough was close enough for most people who cared.  (And considering how few people had a firm grasp of arithmetic, that doesn’t seem to have been all that many people to begin with.)

But here we are today.  And most of us in the West can do arithmetic.  And, what’s more, Ussher figured how all the dates add up for us very nicely, so why on earth don’t we think about ancient history in terms of AM dates today?  Why were we all taught BC dates for the dates before Christ?  They’re confusing; they leave most people unable to get an intelligent grasp of ancient history; history definitely doesn’t run backwards…  What gives??

At this point, it’s entirely a product of one’s Worldview.

If the Bible is not true, then we have no idea when the world started.  The Babylonians, Egyptians, Hebrews (that would be the Bible), and every other ancient people have a different date for Creation.  And we believe that we all evolved from pond scum anyway, so no one can pinpoint the beginning of the world.  But we think the beginning of the universe is the beginning anyway.  But we think there have been infinite “beginnings” with the universe collapsing on itself and having new Big Bangs.  And if there was no beginning, then we don’t have a start date…

Do you see why I said it depended on one’s Worldview?

So, as Christians, which dates should we use to study ancient history?

My position is clear from this article!  But let me give one caveat:  The history happened, and whatever numbers we use to talk about it, we are not changing any of the reality of the actual events that happened.  These dating systems are merely conventions to help us study this history better.

In Grammar of Grace, we have chosen to teach the dates of ancient history, insofar as we know them, counting forward, just like all the people who lived those histories did during their lives.  So, our children learn that the First Year was Year 1.

David’s life goes forward.  Solomon’s reign happened at numbers bigger than David’s reign.  It’s plain to see that David was king 400 years after the Exodus, because the Exodus happened in 2513 AM, and David was crowned in 2949 AM.

Grammar of Grace does list BC dates, too, just to help all of us familiar with BC dates!  But counting the dates starting at the beginning is like a revelation, a key to unlock the secret treasures of ancient history.

What is something you have found to be a revelation, when you applied a Christian Worldview to it?